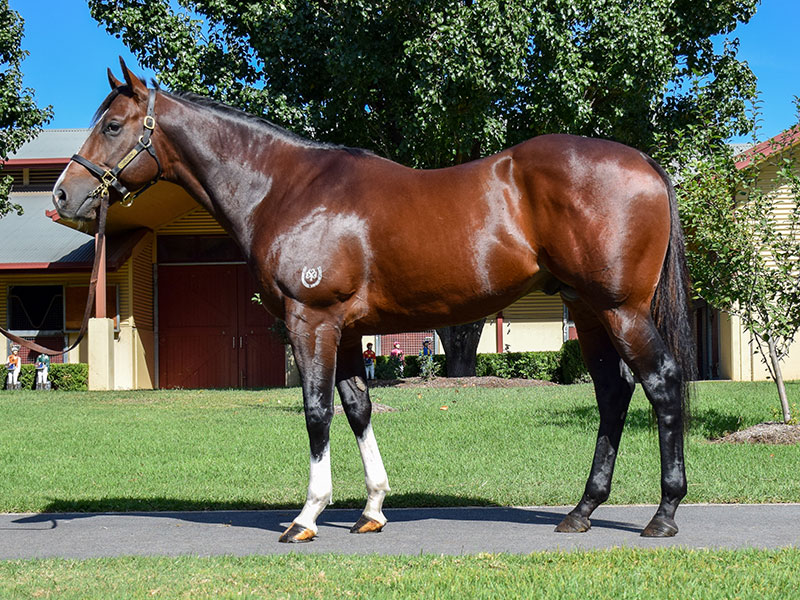 Stratosphere has left outstanding individuals and it is no surprise that his first crop yearlings were exceptionally well received this year in the sale ring. His yearlings averaged over $36k (9 x service fee) providing breeders with one of the best return on service fee of any stallion in Australia. Stratosphere’s yearlings sold for $125k, $80k, $70k, $65k etc and were bought by many leading local and interstate trainers and we can’t wait to see them hit the track in the months ahead.

Stratosphere immediately impressed trainers Peter and Paul Snowden in his first campaign when he was aimed at the Golden Slipper and had his first run in the Gr. 3 Canonbury Stakes, the traditional lead up race to the Golden Slipper. The Canonbury has previously been won by the likes of Capitalist and Vancouver.

Stratosphere ran a brilliant 2nd in the Gr.3 Canonbury Stakes beaten a nose by the last start Breeders Plate winner Performer and it was only inexperience that cost Stratosphere the race. Unfortunately during the Canonbury Stakes Stratosphere sustained a tendon injury and did not race again so was never able to show his full potential.

Peter and Paul Snowden had a huge opinion of Stratosphere and stated that they thought he was their best 2YO that year, the Snowden stable went on to win the Golden Slipper that year with Estijaab.

“He had precocious speed and untapped ability and showed that at his first start when running second even though he was very inexperienced. He was a genuine Gr. 1 horse and we felt he was the best 2YO we had that season.” Peter Snowden.

Stratosphere is an outstanding individual and was purchased at the 2017 Magic Millions for $925,000 by Newgate Farm & China Horse Club as part of their stallion syndicate – purchasing the best colts on the market.

Stratosphere is by one of Australia’s leading sires in Snitzel who is also proving to be a sire of sires with the likes of Shamus Award and Russian Revolution doing a great job at stud.

“I am delighted to have secured Stratosphere to stand at Grenville, he is the best looking son of Snitzel, had blistering 2YO speed and comes from a brilliant family. He ticks all the boxes.” Graeme McCulloch