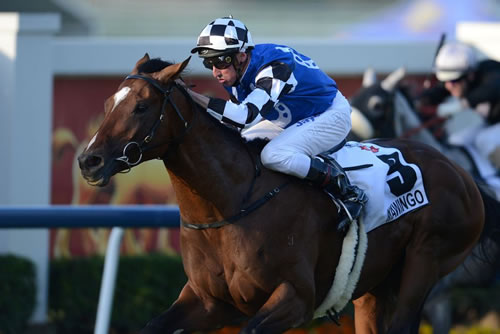 Mawingo showed a great turn of foot bursting through a gap to win the Gr.1 Doomben Cup (2000m). However, Mawingo’s most notable performance in Australia was running an unlucky second in the weight-for-age Group 1 C.F. Orr Stakes (1400m), beaten by All Too Hard.

“He showed amazing speed and with any luck at all should have won“- Jockey Craig Williams after the C. F. Orr Stakes.

In addition to the success achieved in Australia Mawingo was also a Group 3 winner in Germany and a winner in Singapore over 1600m and he also ran 3rd in the Group 1 Singapore International Cup.

Mawingo’s pedigree is one of considerable depth. His sire, the globe-trotting Tertullian won five Group races in three countries. A son of highly successful Mr Prospector stallion Miswaki, Tertullian is a ¾ brother to Urban Sea, a sensation both on the track – winning the Group 1 Prix de l’Arc de Triomphe – and at stud, producing the champion racehorses and outstanding stallions Sea The Stars and Galileo.